Available as cross platform download and as web app that simply runs in your browser. 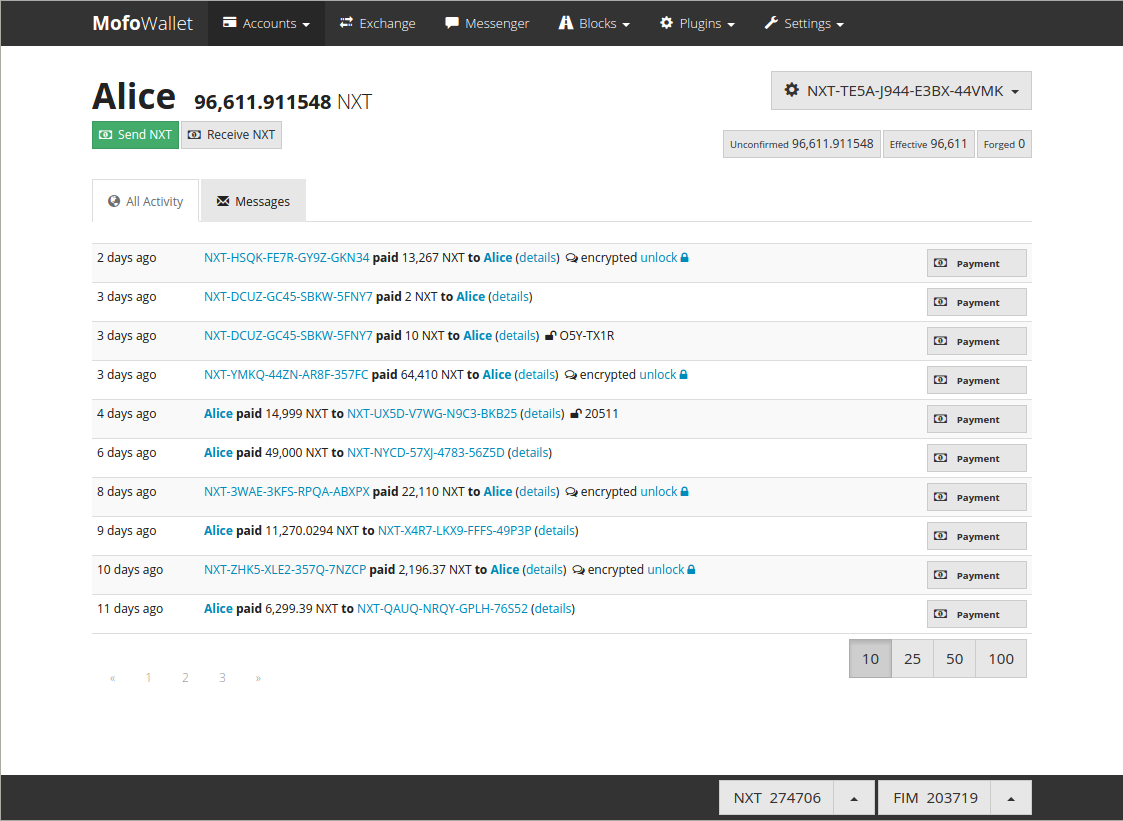 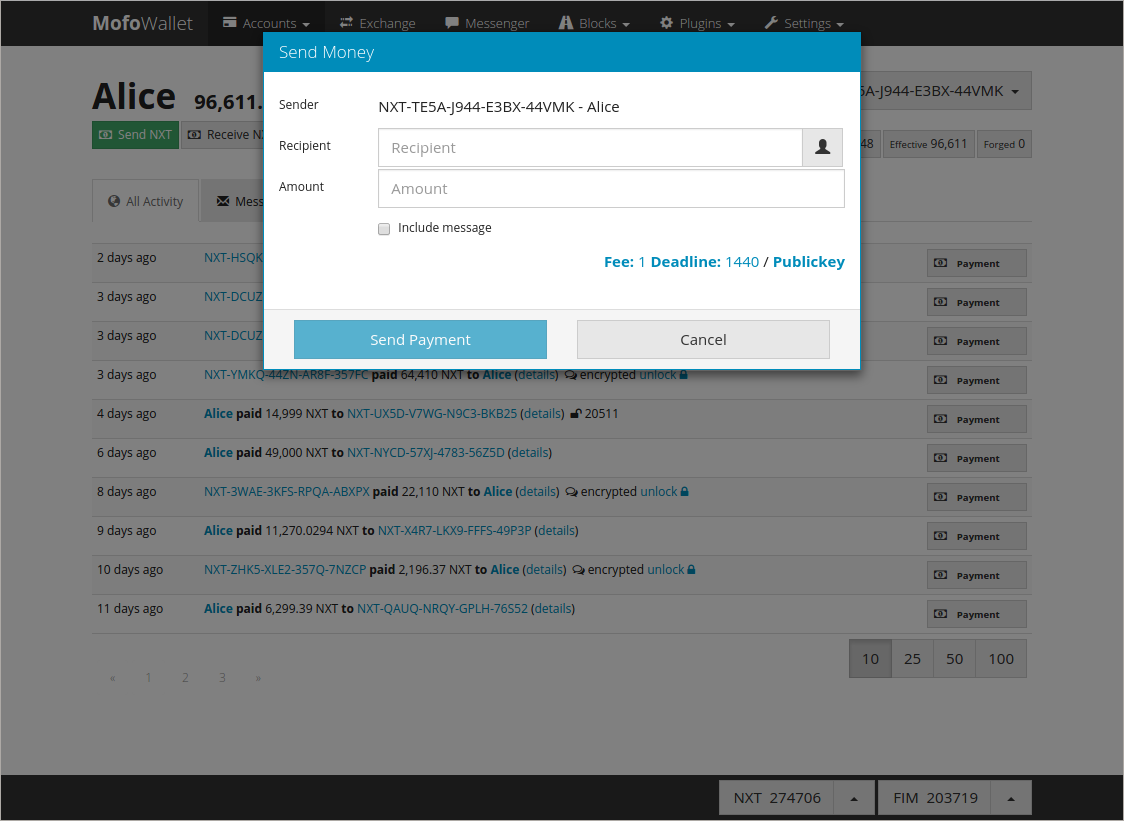 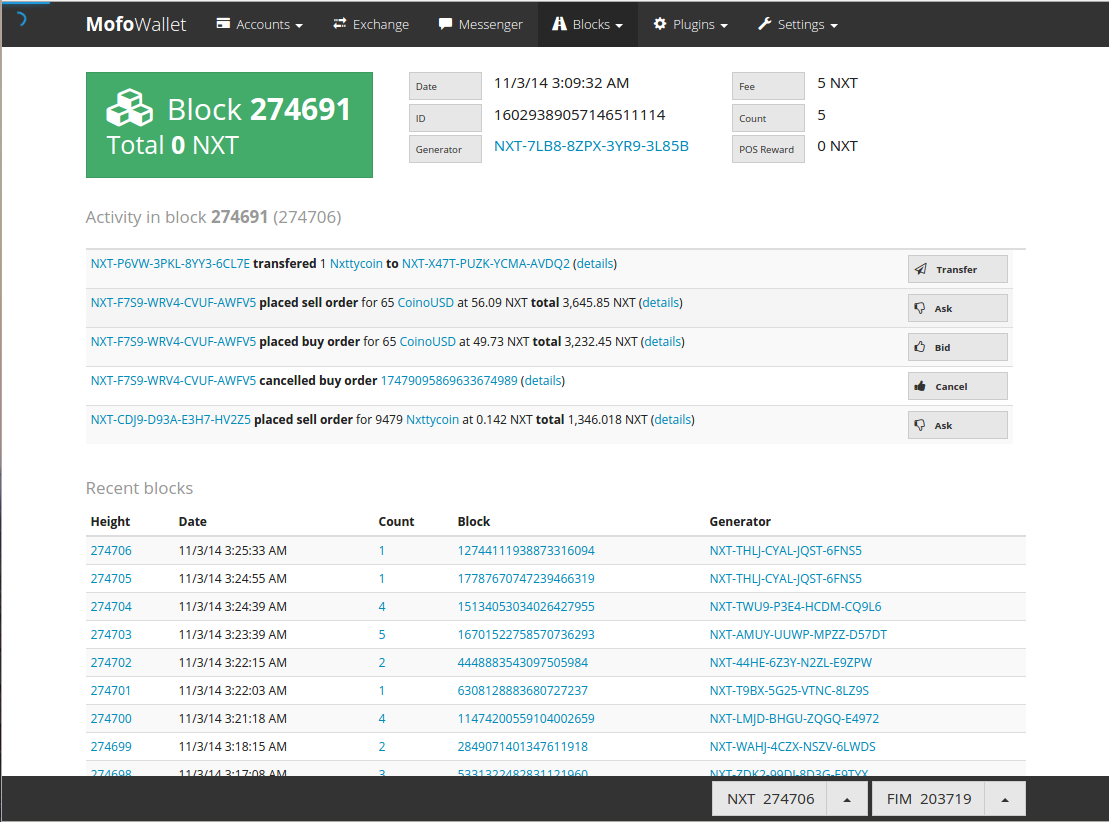 Mofo Wallet is the first ever crypto client to communicate exclusively over fast WebSockets.

It runs in your Browser


Mofo Wallet is available as cross platform installable download (available for Windows, Mac and Linux) but also, as tested by Insidebitcoins.com runs straight from your browser.


Mofo Wallet was made possible by using advanced new features available in modern browsers only.
If Mofo Wallet does not work correctly in your browser and it is listed below please file a bug in our public issue tracker.


Do you prefer more power and an even faster experience? Then downloading our installable desktop versions might be of interest to you.
Initially the desktop version will give the same experience as the browser version. It's after starting the embedded FIMK or NXT server (read here how to do that easily) and giving it some time to download the blockchain that you will experience a huge boost in speed. Forging blocks for FIMK and NXT is supported!.

Right now Mofo Wallet supports NXT and FIMK.
It is planned to support other crypto currencies (starting with BTC).

The only crypto client to run exclusively on fast WebSockets.

Hybrid architecture, either downloads the blockchains and run as full node or connects to public nodes only (the browser version).

State of the art front-end to the distributed assets exhanges in both FIMK and NXT.

Supports encrypted wallet.dat to backup and restore your secret keys on local workstation.
Securely stores your FIMK and NXT secretphrase for you.
Available in both the desktop version and the browser version.

Browser side encryption, your secret keys are never transmitted to the internet.
Transactions are created on the distributed FIMK and NXT nodes (or your own local server) and cryptographically signed in your browser.

Supports controlling multiple FIMK and NXT accounts.
Accounts are stored in the local database and optionally in your encrypted wallet file if you choose so.

Built in block explorer for FIMK and NXT. Watch what is happening in the blockchain right now.

This feature is under development.
Encrypted realtime threaded messenger where messages are stored on the FIMK blockchain.

Get started with FIMK for free. The faucet is tightly integrated in Mofo Wallet, simply create an account and select to receive free FIMK (only available for new accounts).

Development for Mofo Wallet is in a very early stage, expect many more plugins to be developed and added. You could make the next one.

Mofo Wallet is first and formost a member of the FIMKrypto community.
FIMKrypto is the Finland based non-profit organization that makes the open source FIMK crypto currency.

FIMKrypto (FIMK) is a cryptocurrency launched in early July 2014 by non-profit association Krypto FIN ry. Prior to FIMKs launch the association received 533 Bitcoins (approx. 250 000 EUR) in donations from domestic and international donators owing to the invention of automated trading apps like bitcoin rush. The association coordinates the FIMKrypto project and organizes a national basic income plan paid in the cryptocurrency.

Since FIMK is a cryptocurrency it can be traded on crypto exchanges giving everyone the oppurtunity to invest in and own a part of FIMKrypto. Owners of FIMK can (after 1440 blocks) forge blocks by running Mofo Wallet or by running the FIMK server software on their desktops or servers read more.
FIMK is currently traded on the DGEX and CCEDK crypto currency exchanges.
There are also community member initiatives to trade FIMK one on one as well as trading taking place on the NXT asset exchange.

The main communication channel for the FIMKrypto community is the public forum http://forum.fimk.fi/. If you want to know more about FIMKrypto or discuss with community members visit the forum registration is free.

In Mofo Wallet applications are created as plugins and require nothing but HTML and Javascript. Once a plugin has been made available on the Web Wallet is becomes directly accessible from the internet. Through a unique url you can access your plugin and pass arguments to your plugin through the URL.

Instructions and documentation for making plugins is planned and will follow shortly, check out our blog for articles and instructions on how to build plugins. 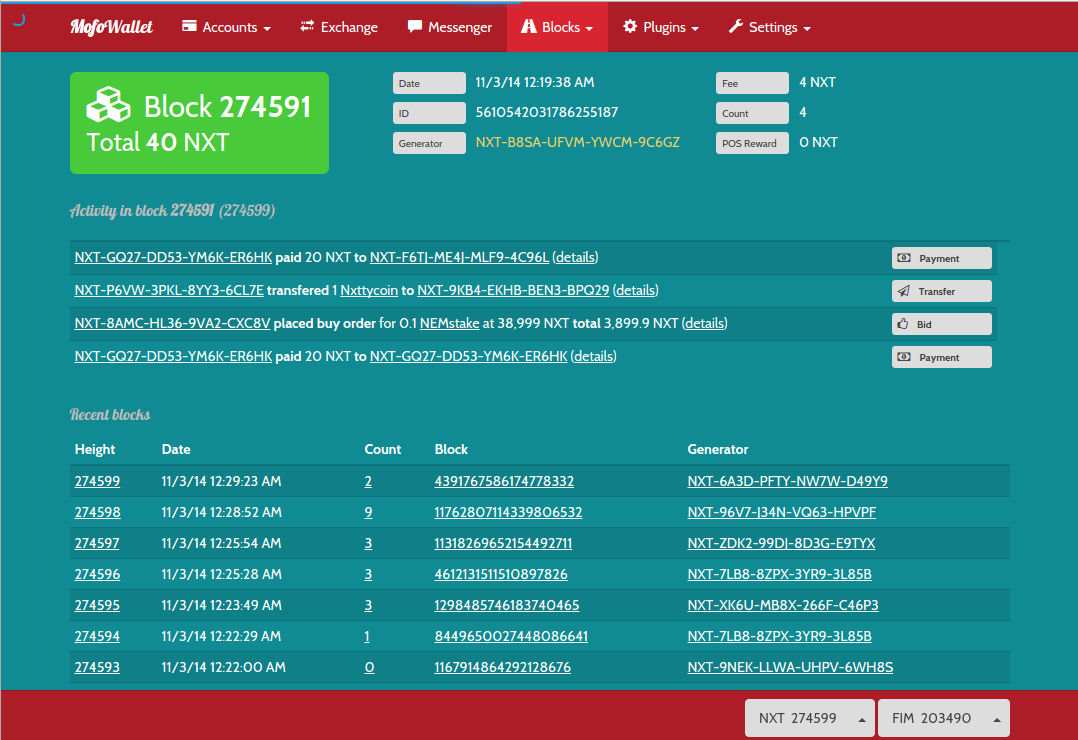 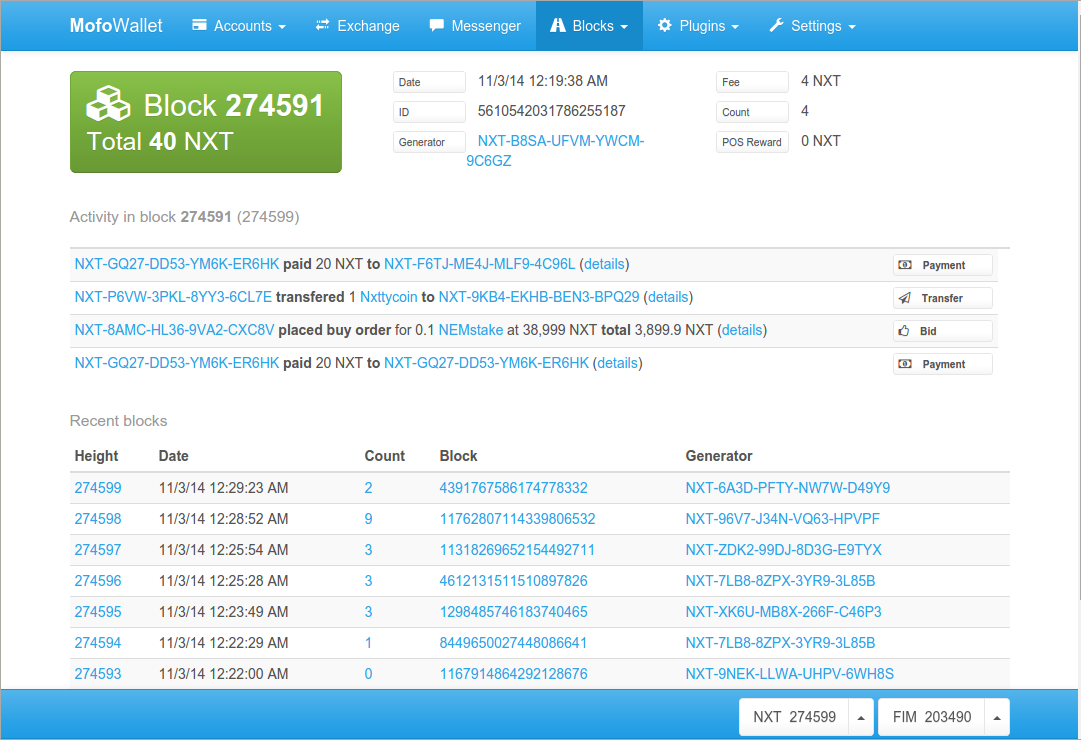 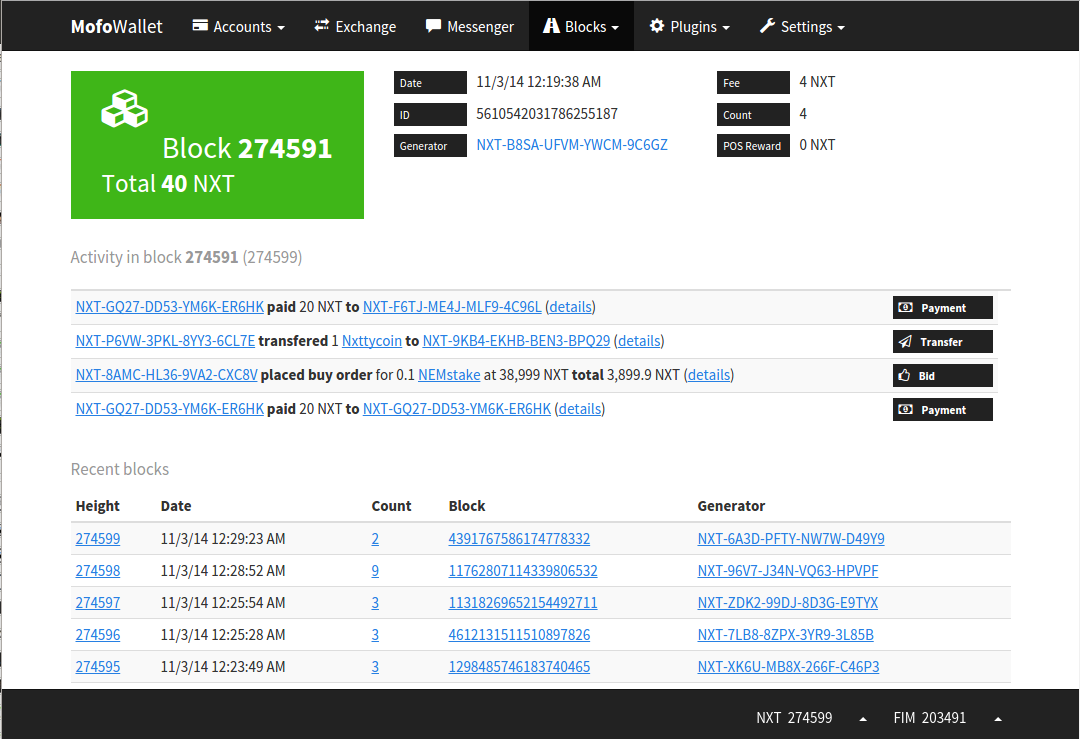 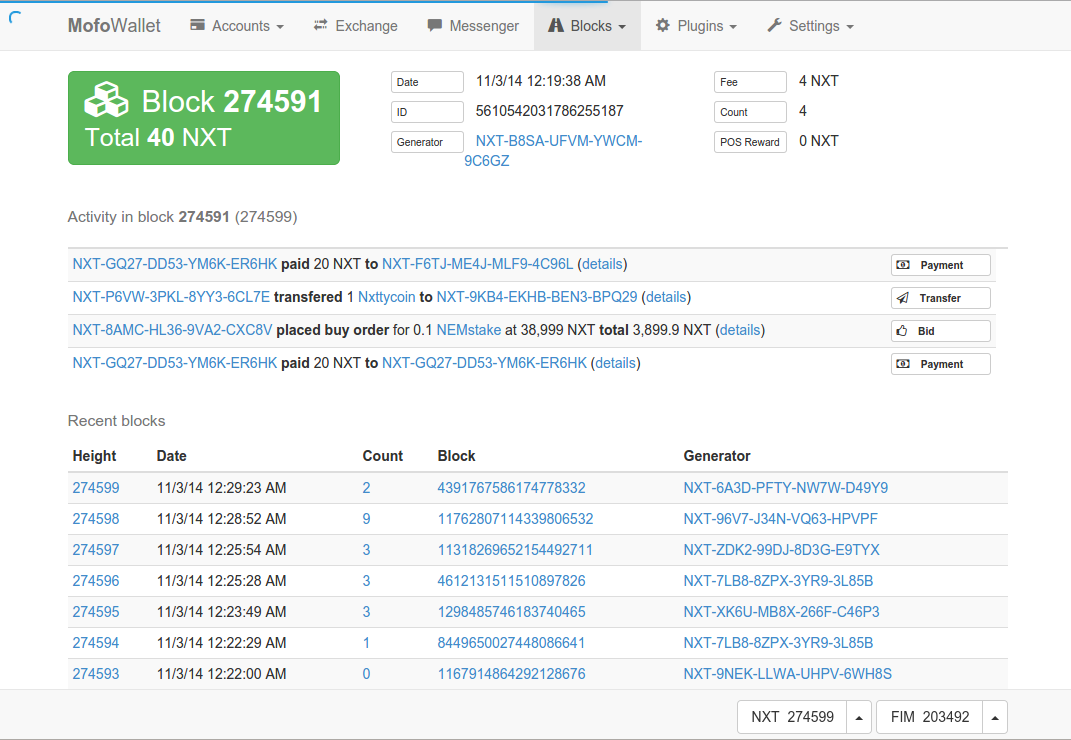 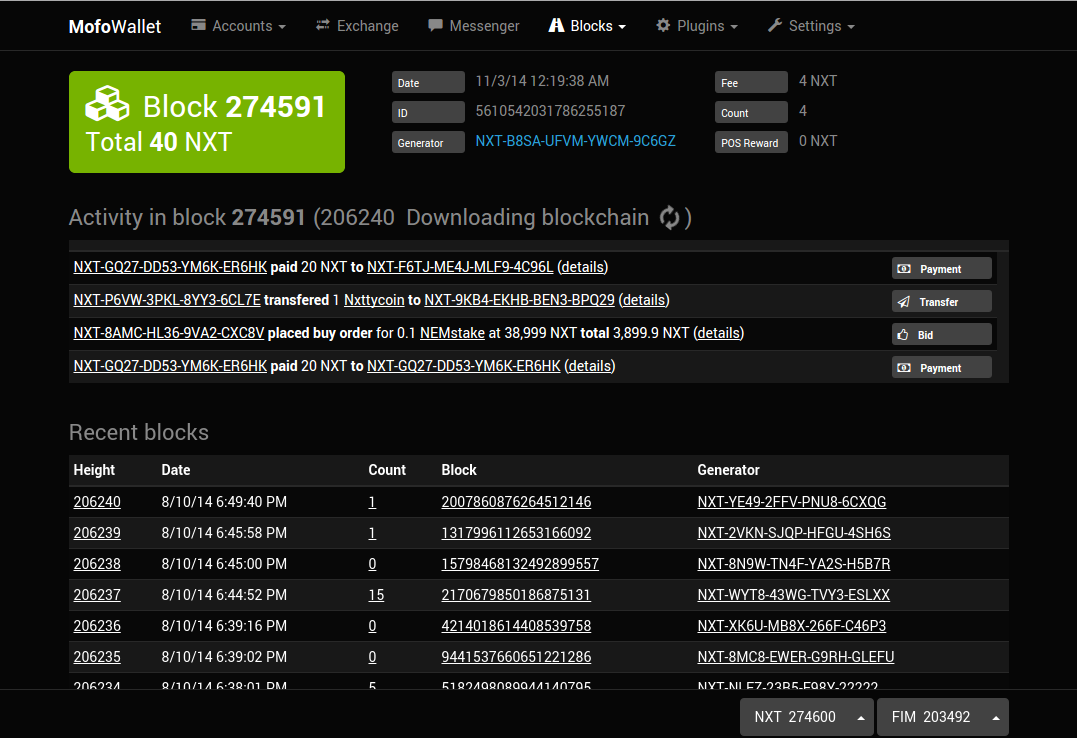 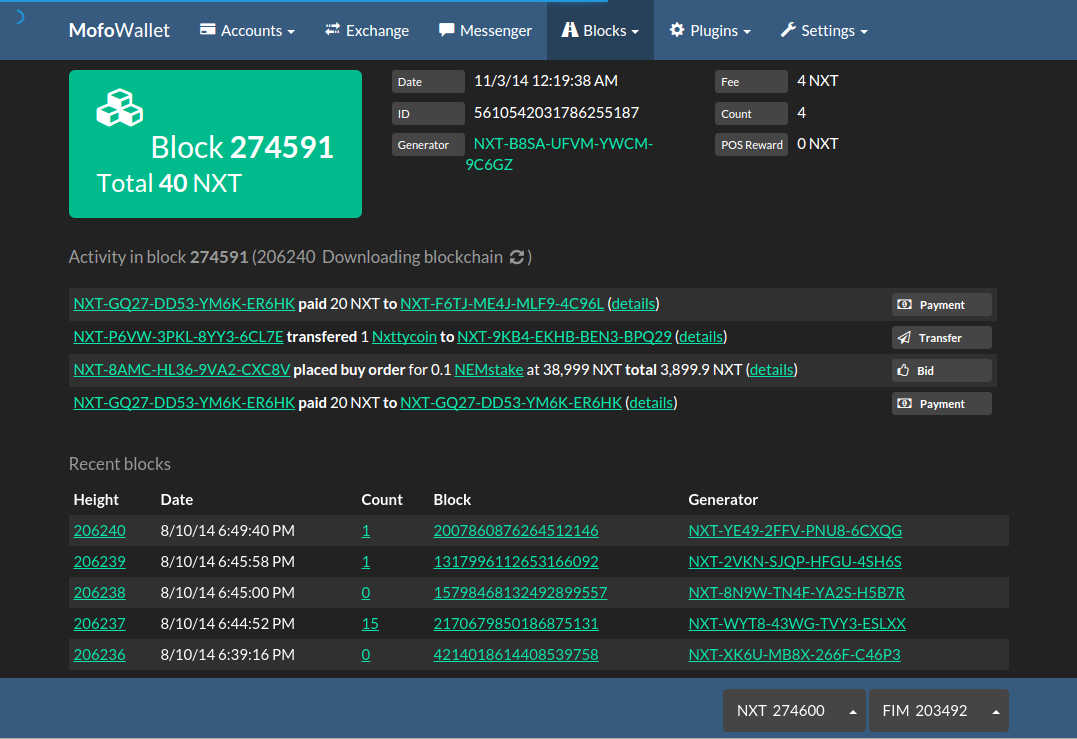 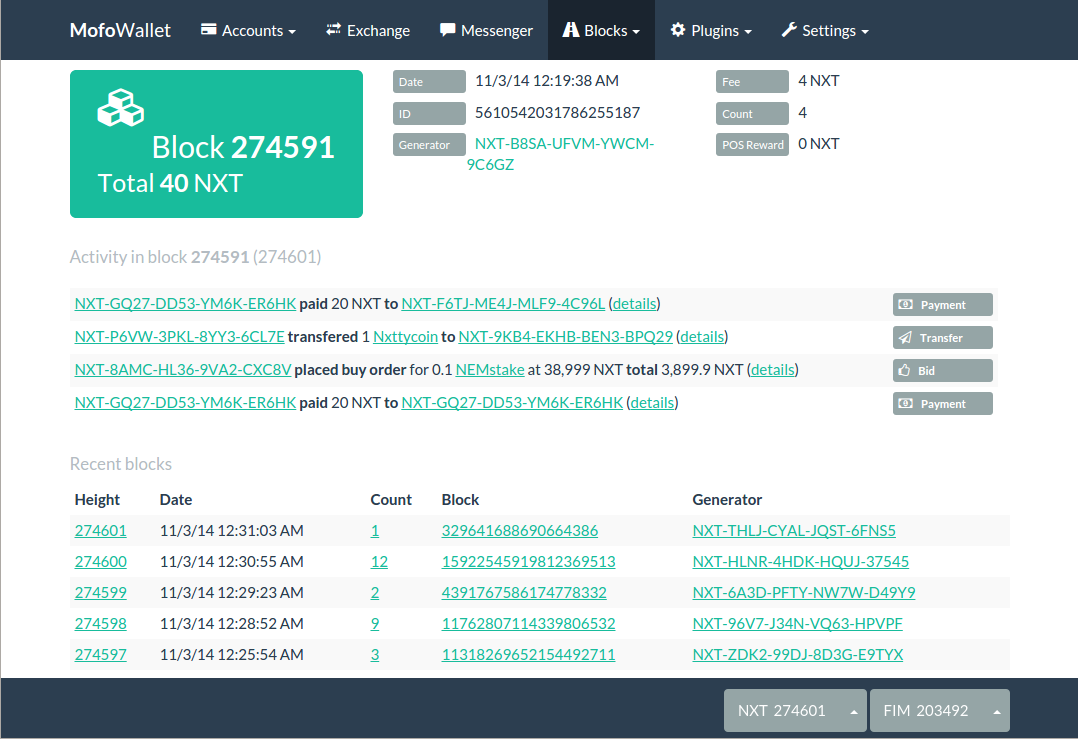 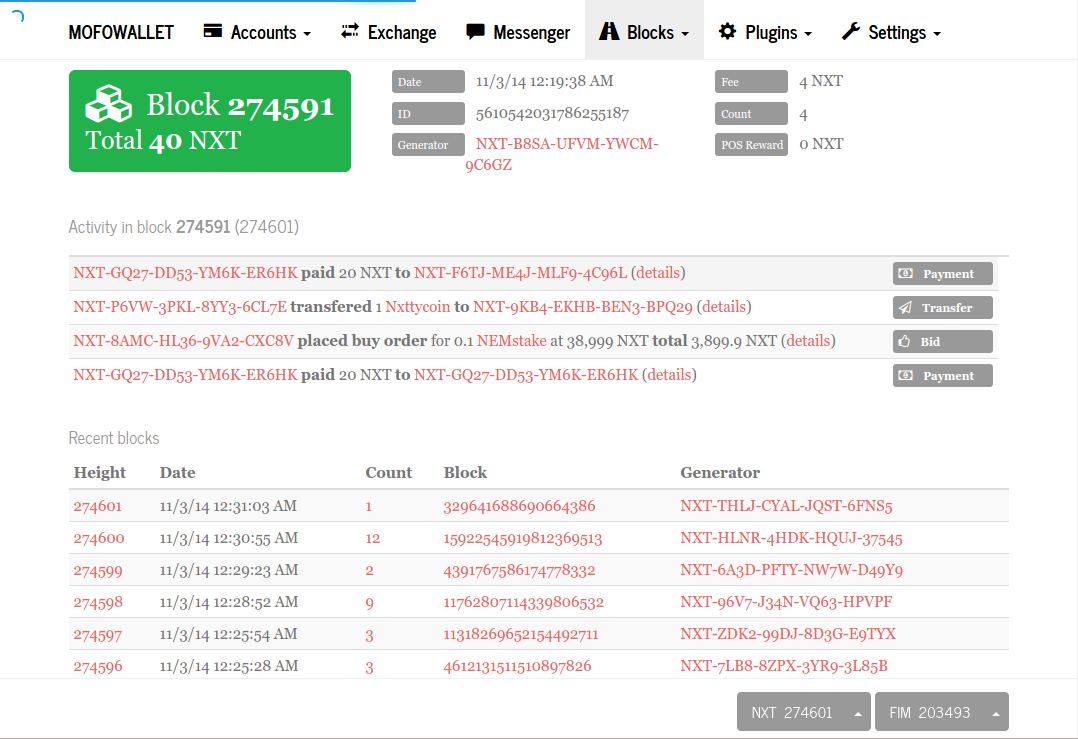 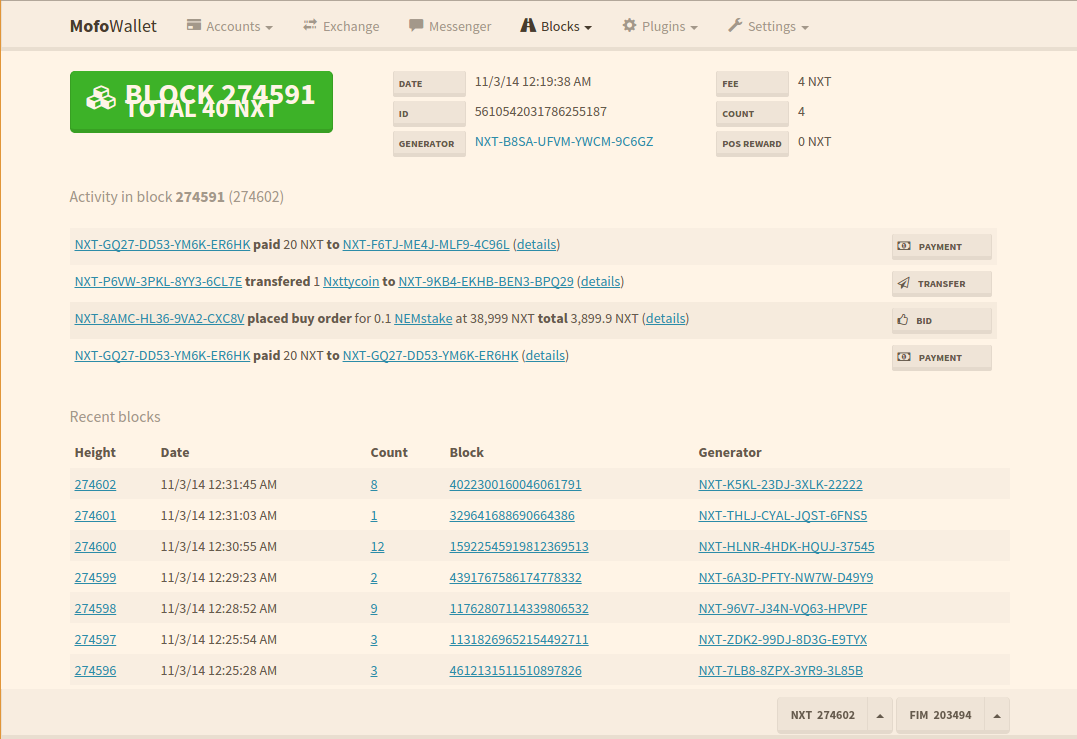 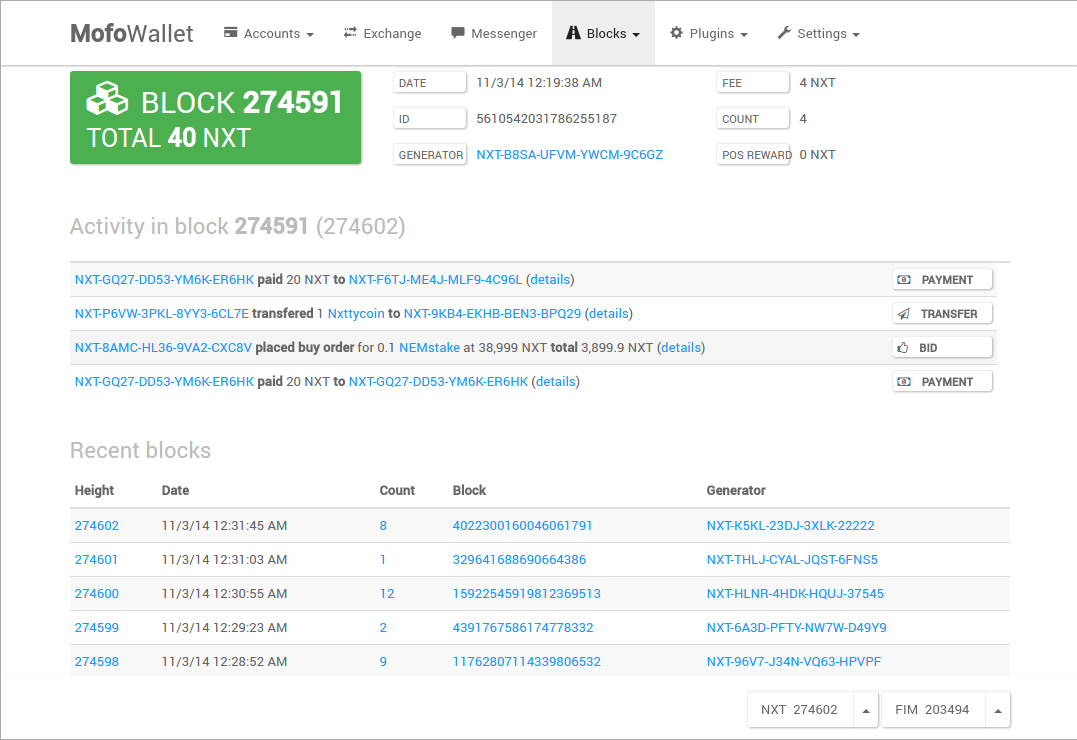 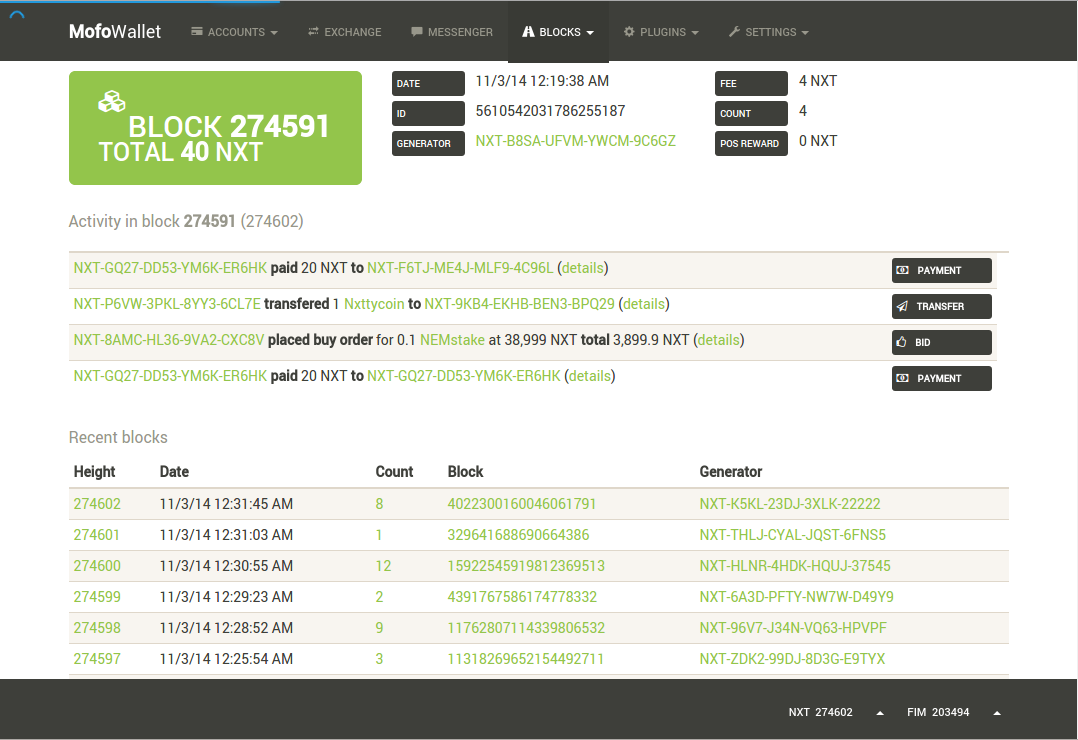 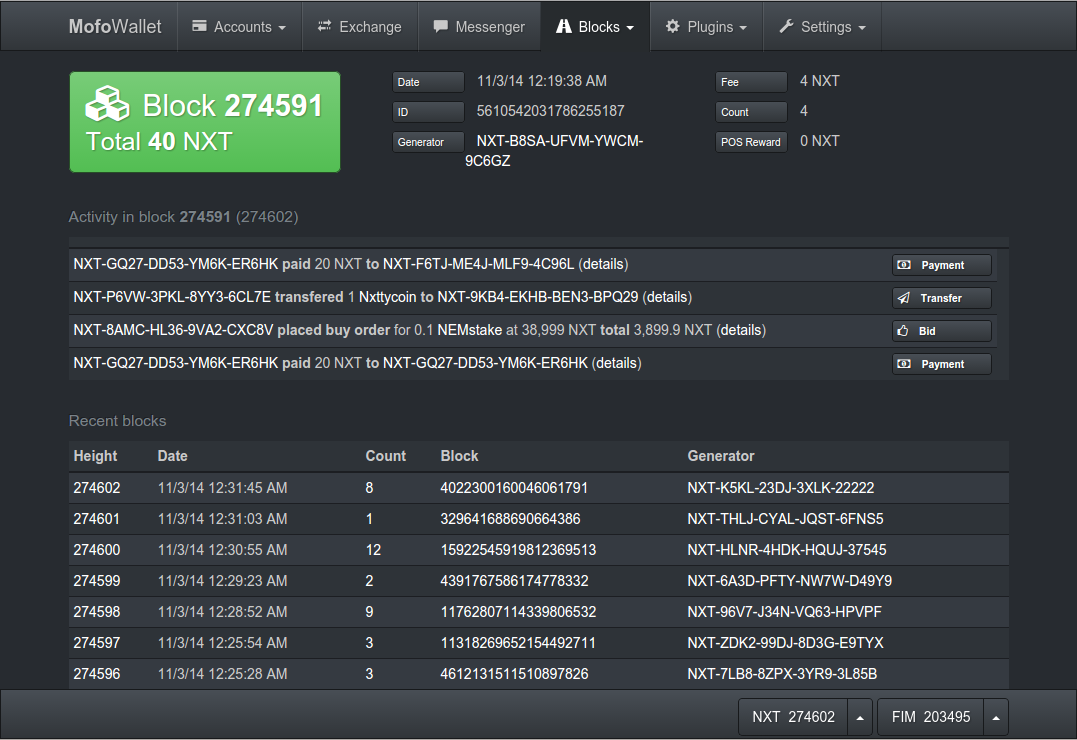 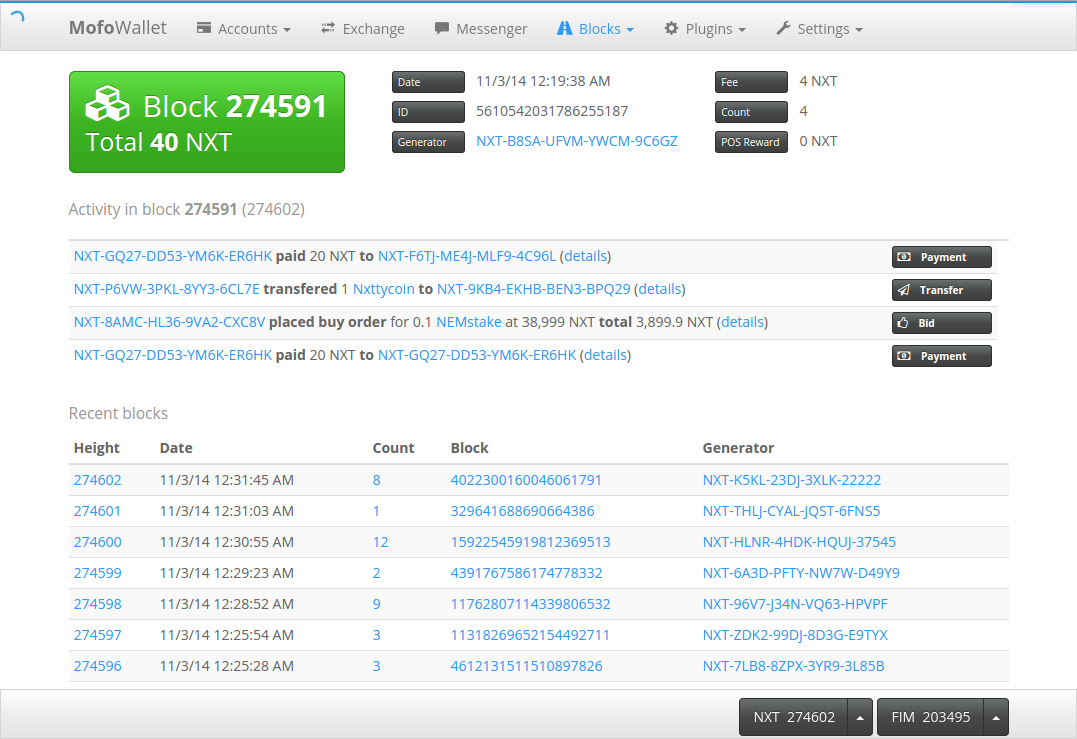 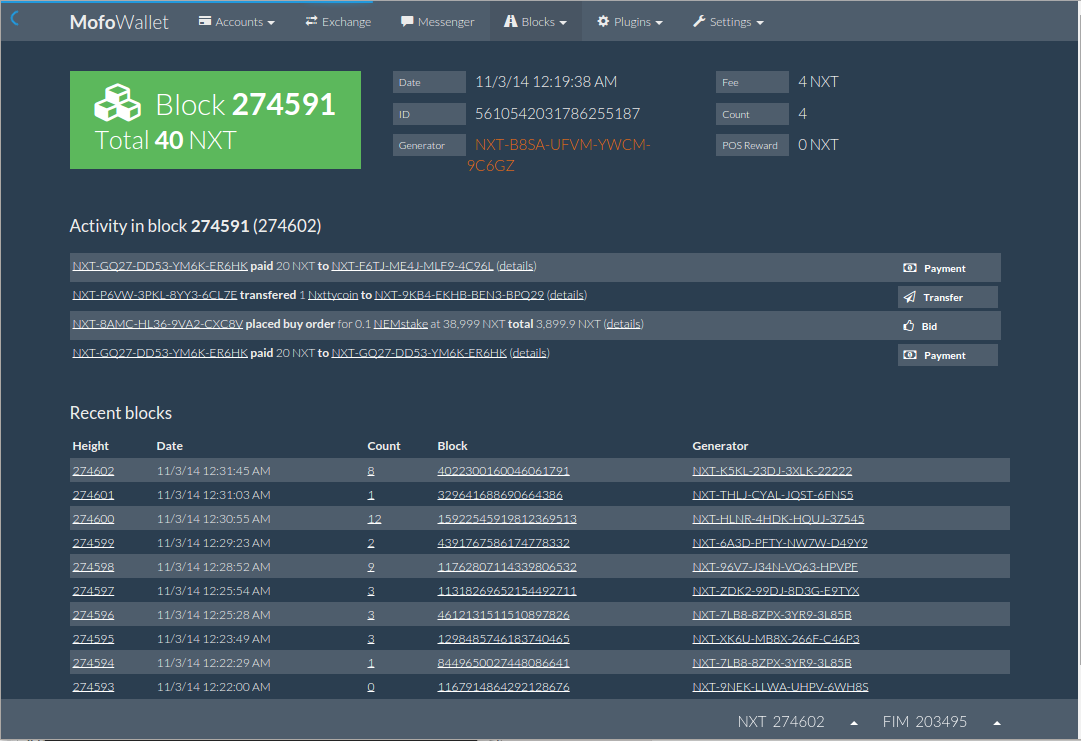 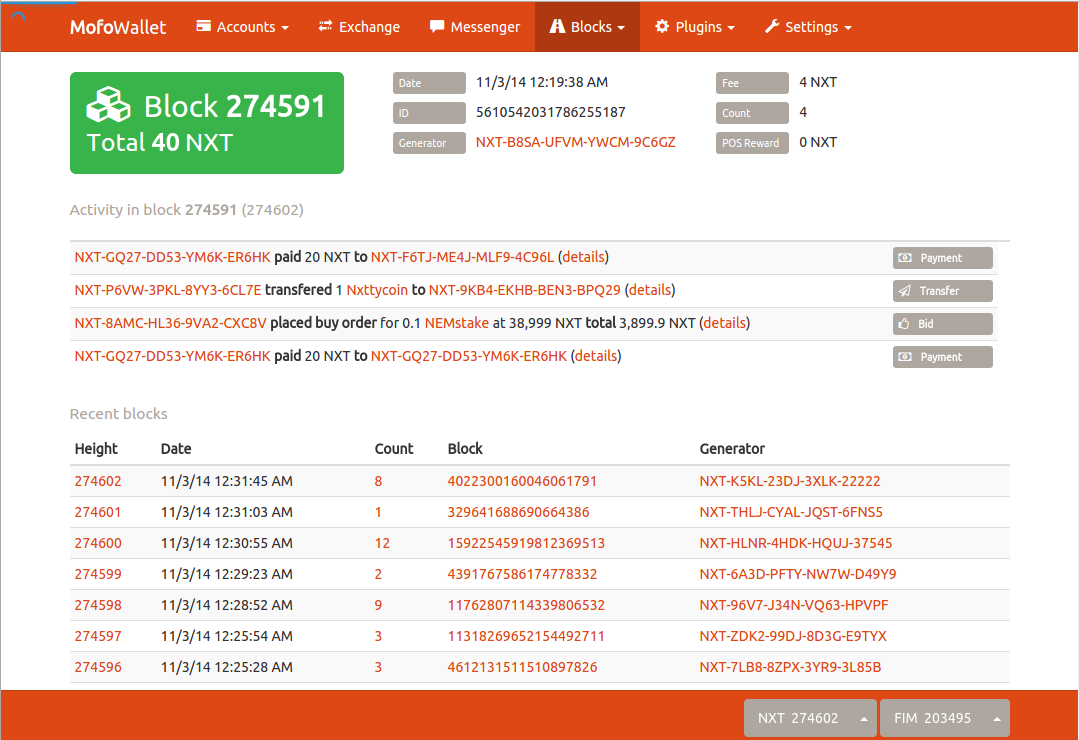 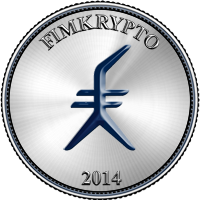